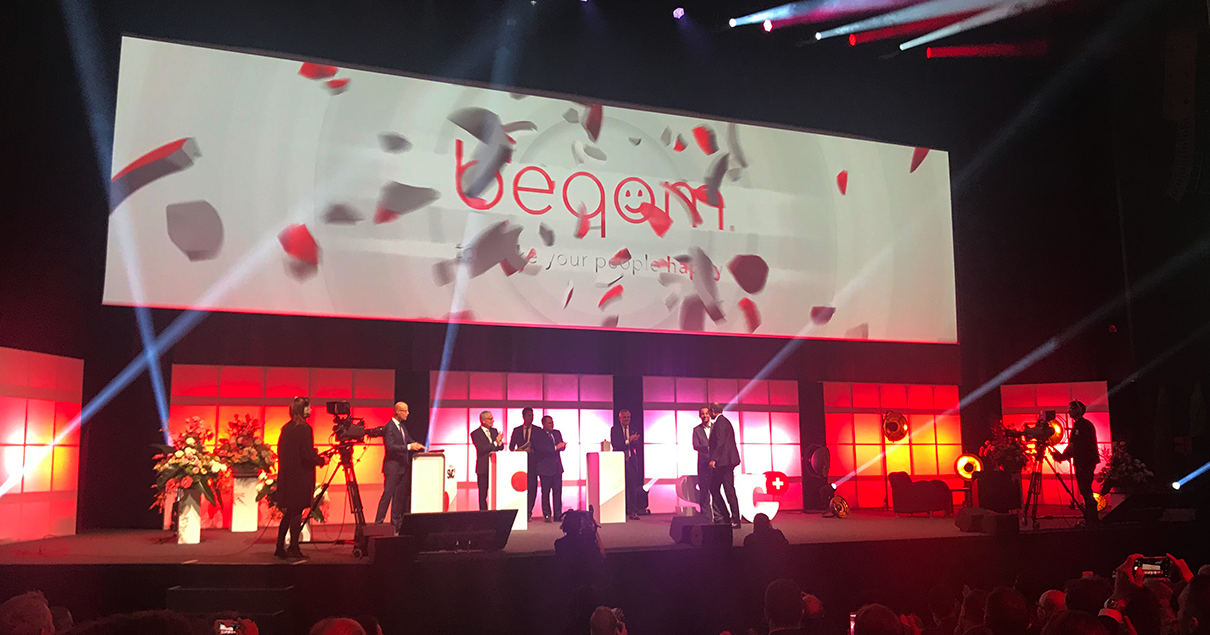 beqom, the provider of a cloud-based total compensation solution, is proud to announce that it has been distinguished as the winner of the 2018 SVC Suisse Romande Award, rewarding the best SME in the French-speaking part of Switzerland. More than 1200 people attended the ceremony, held in the Swiss Tech Convention Center in Lausanne, to celebrate the six finalists of the 2018 edition.

Since 2005, the SVC award has been rewarding innovative companies for their entrepreneurial spirit and remarkable achievements. From nearly 80 companies, the jury selected six nominees. beqom was joined on the podium by Flyability SA in second place, and Fondarex SA in third place.

The most important selection criteria, evaluated by a jury of 13 independent experts, are the examination of the products and services offered, the quality of the management team, the commercial success and the future potential, the capacity for innovation, the corporate culture and the commitments to the economic and social network in their region.

"The six finalists in this edition were examples of the diversity and know-how of our region. Some SMEs have recently been start-ups, but they are now well anchored in the regional economic fabric and are developing rapidly in Switzerland and internationally. All have adapted to the new demands of the economy, "said Jean-Marie Salina and Michael Willimann, SVC managers for the French-speaking Switzerland region.

"We are honored to receive this recognition from the Swiss Venture Club,” said Fabio Ronga, beqom CEO. “beqom was born after we identified how most large companies in the world lacked a simpler, flexible approach to define and compute employee compensation. Nine years on, this award acts as an external validation of our success, but it would not be possible without the incredible work of the beqom team. They have all played a part in developing beqom into the company that it is today, and I’d like to dedicate the award to them.”

“beqom deservedly won the attention of the jury with their capacity to execute on their vision. The team has mastered their strategy of simplifying employee compensation, and we are excited by their global ambitions for the future”, explained Michael Willimann.

An Introduction to beqom by the Swiss Venture Club (subtitles available in english):

As featured in the following French media: